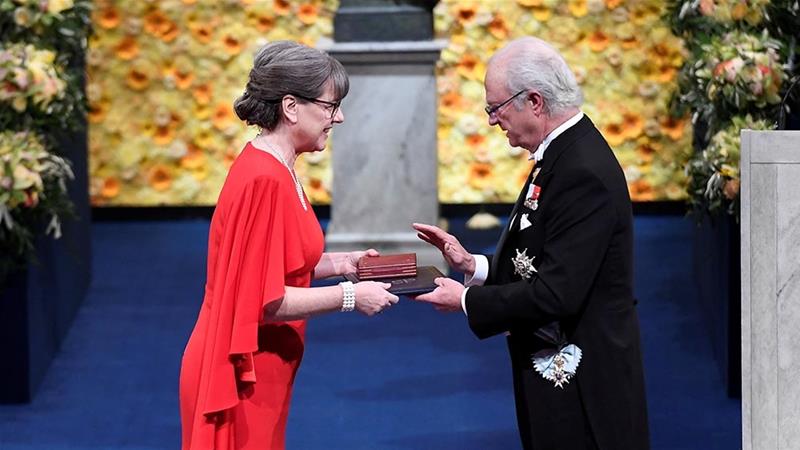 It’s Nobel Prize season and once again, men are dominating the list of laureates in science, technology, engineering and mathematics (STEM) fields AWIS examined the awards allocation processes of 18 STEM disciplinary societies with a combined membership of nearly 500,000 scientists and mathematicians. The survey found that “women win a higher proportion of teaching and service awards than expected” rather than scholarly awards.

It’s Nobel Prize season and once again, men are dominating the list of laureates in science, technology, engineering and mathematics (STEM) fields.

The all-male roster so far highlights what has become something of a ritual criticism of the Nobel committees in recent years: the lack of awards recognition for women in STEM.

With more women entering STEM fields, it’s not just accolades that are at stake. Career advancement, research funding and opportunities as well as pay are influenced by professional awards. And without visible, recognised female scientists, young girls can be discouraged from entering science and mathematics fields in the first place, studies have found, possibly robbing future generations of a promising laureate.

Our culture still doesn’t think of physics as a women’s field, so having a woman recently win the prize is a good thing because hopefully someone will look at her and think a woman can get this very prestigious prize.

Women are underrepresented among Nobel Prize winners as a whole. Only 51 women have been awarded the honour across all disciplines between 1901 and 2019. Historically, physics has been an especially male-dominated prize.

“Our culture still doesn’t think of physics as a women’s field, so having a woman recently win the prize is a good thing because hopefully someone will look at her and think a woman can get this very prestigious prize,” Ivie told Al Jazeera.

The number of women pursuing careers in physics is increasing, according to a study published this year by Ivie and her team, who reported that women earned 20 percent of physics doctorates and 40 percent of astronomy doctorates in 2017. But more men are entering the fields as well, meaning the overall percentage of women in physics has basically remained the same.

While women earning doctorates in physics can expect to be paid as much as their male counterparts one year after graduation, the pay gap widens considerably after 10 to 15 years, with men earning 10 percent more than women, the study found.

Ivie and her team also identified inequities in the resources available to women in sciences, such as lab space and the ability to hire graduate students or employees to help with research.

“The lack of women getting awards and prizes is a reflection of some of these inequalities they’ve experienced over their careers, and things take a snowball effect,” says Ivie.

The phenomenon is known as the “Matilda Effect” – a term coined by scientific historian Margaret Rossiter and named after 19th-century suffragist and feminist scholar Matilda Gage, who both experienced and drew attention to the phenomenon of female scientists having their accomplishments overlooked or attributed to male colleagues.

While fewer women in STEM fields means the relative pool of female candidates to be nominated for and awarded prizes is smaller, that is slowly changing.

The number of women receiving doctorates in the US more than doubled between 1987 and 2017, with the biggest gains in the STEM fields of mathematics and computer science, according to the National Center for Science and Engineering Statistics’ 2017 Survey of Earned Doctorates.

Inequities in the award process from start to finish – including gendered language in calls for nominees – play a big role, the study found. Women are less likely to promote themselves or ask for recommendations than male colleagues, and the letters of recommendation that female nominees receive “tend to be shorter, mention the candidate’s gender and personal life, contain fewer descriptors of exceptional qualities [and] use stereotypically female adjectives such as ‘compassionate,'” researchers found.

Unconscious biases that devalue women’s intellectual achievements and praise their communal and caregiving contributions also dictate the types of awards for which women are considered, a 2015 study by the Association for Women in Science (AWIS) found.

AWIS examined the awards allocation processes of 18 STEM disciplinary societies with a combined membership of nearly 500,000 scientists and mathematicians. The survey found that “women win a higher proportion of teaching and service awards than expected” rather than scholarly awards.

Women were also less likely to be honoured with scholarly awards when “women-only” awards were also available.

The make-up of the awards committee was also a factor. In the 2012 study, researchers found that in one professional physics society, “the presence of each woman on an award committee doubled the chances of a woman winning an award, and that committees chaired by women were three times more likely than those chaired by men to name a woman as a winner.”

Chemistry is one area where women are winning more recognition.

Women in chemistry are also making progress closing the gender pay gap, according to the 2017 Survey of Earned Doctorates.

Sharon Mulvaney, 34, earned her bachelor’s degree in chemical engineering from Northwestern University in the US in 2007.

“For me, I feel empowered knowing I am a minority in the field. I worked hard and completed the same course requirements as men and am a true peer,” Mulvaney told Al Jazeera.

Her starting salary as a newly graduated chemical engineer in a research and development lab was $50,000 a year. Mulvaney, who lives in New Jersey, now works on the sales side as a senior account executive at Ajinomoto Health & Nutrition North America and earns a six-figure salary, she says.

“I think because chemistry requires a certain type of acquired knowledge and skill set learned in college and on the job, this helps with the pay gap,” she explained. “The world works on science, it is all around us, and once you demonstrate your ability to talk about this subject, it makes pay gaps easier to reduce.”

But since Mulvaney gave birth to her son in May, she says she has encountered obstacles her male colleagues have not, such as having to decide whether to take a pay hit to extend her maternity leave and trying to find time and a suitable private space during work hours to pump her breast milk.

A 2019 study published in the Proceedings of the National Academy of Sciences found 43 percent of women leave full-time STEM careers after becoming parents, compared to just 23 percent of men.

When women leave the field, that too impacts awards eligibility.