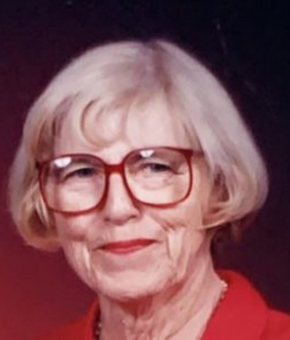 Dr. Anne Briscoe, a founding mother of the Association for Women in Science (AWIS), passed away April 16, 2014, in Sarasota Florida at the age of 95. She served as AWIS President from 1974 to 1976. Dr. Briscoe was the first editor of the AWIS Newsletter which continues to be published today as the AWIS Magazine.

Dr. Briscoe was educated at Adelphi University and Vassar College. After postponing her graduate studies to teach “the boys who failed science” during World War II, she graduated with a Ph.D. from Yale in 1949 and went on to teach at Columbia College of Physicians and Surgeons, Hunter College School for Health Sciences, and the Harlem Hospital Center School of Nursing.

She was a representative of American Women Scientists at the United Nations, vice-chairperson of the New York City Commission on the Status of Women and a fellow of the New York Academy of Sciences. She was advised by the Honorable Ruth Bader-Ginsberg and was awarded the Yale Medal and the Wilbur Cross Medal for her work on behalf of Yale University. During one of her three visits as a guest to the White House, she was almost removed by the Secret Service because of her eagerness to say hello to then President Gerald Ford and tell him how pleased AWIS was by his programs for women.

In an interview with AWIS Magazine in 2011 on the occasion of the association’s 40th Anniversary, Dr. Briscoe summed up her career and her life, “It’s been a great adventure.”