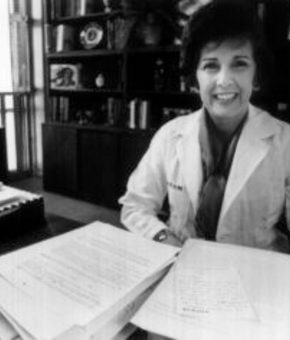 Dr. Estelle Ramey, one of AWIS’ founders, passed away September 8, 2006, at her home in Bethesda, Maryland, at the age of 89. Dr. Ramey earned her degree in Physiology and Biophysics and taught at Georgetown Medical School, but was better well known as a feminist speaker and writer. Noted for her great wit, Dr. Ramey once quipped: “We will have equality when a female schlemiel moves ahead as fast as a male schlemiel.”

During the early years of AWIS, one of the organization’s first victories involved Dr. Ramey’s fight against a medical textbook company that published an anatomy textbook replete with pictures and puerile text of strippers, purportedly to illustrate anatomical issues. AWIS’ threatened national boycott of all books produced by that publisher was a resounding success, made Time magazine, and marked one of the first times AWIS forced an unconditional surrender to the American women in science.

Throughout her career, Dr. Ramey decried sexist comments and situations that treated women as less than fully human. She felt very strongly about how little, if anything, it took to extend a helping hand to someone else in a way that could really make a huge difference in their lives. As she wrote in her book called Letters to our Grandchildren, “If I could leave you with any advice, it would be to speak words of caring not only to those closest to you, but to all the hungry ears you encounter on your journey through a cold world. Stop on the mountain climb to bring all those less lucky, less agile or well endowed. It will make the view even more beautiful when you get to the top.”

In 1973, the AWIS Educational Foundation, a separate 501(c)(3) organization, was begun by Dr. Estelle Ramey with her personal funds. This foundation was ultimately merged into AWIS where Dr. Ramey’s intention lives on in our scholarship initiatives.