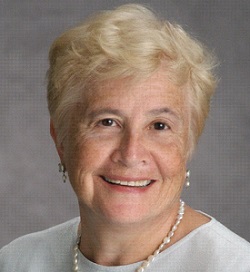 Dr. Phoebe Starfield Leboy was a Scientist, advocate, mentor, and a member of the Association for Women in Science (AWIS). She served as the association’s president in 2008 and 2009.

Dr. Leboy took her B.A. with honors at Swarthmore in zoology, and her Ph.D.at Bryn Mawr in biochemistry. In 1963, she joined the University of Pennsylvania (Penn) School of Medicine as a research associate in biochemistry, and taught at the dental school for a year (1965-66) before taking up her NATO postdoctoral fellowship at the Weizmann Institute’s Department of Experimental Biology.

A Professor of Biochemistry in the University of Pennsylvania’s Department of Biochemistry in the School of Dental Medicine from 1976 until retiring in 2005, Dr. Leboy held faculty appointments in both the Cell and Molecular Biology and Bioengineering Graduate Groups. She served as a permanent member of several NIH grant review panels and as chair of the NIH Skeletal Biology Development and Disease (SBDD) Study Section. During 2000-2001, she co-chaired Penn’s Task Force on Gender Equity, and in subsequent years served as a liaison from Penn to the MIT/9 University consortium on gender equity in science.

As a past-president of AWIS and principal investigator on the NSF ADVANCE PAID grant to increase women’s recognition for research in scientific disciplinary societies, Dr. Leboy was a driving force of innovation in the science of broadening participation and a leader among academic researchers in the push for equal recognition and status of women in the STEM fields. For more than 40 years, she tirelessly advocated to ensure that women in the STEM fields were compensated fairly and without discrimination; advanced equitably and without bias; respected and recognized for their scientific achievements; exposed to successful role models in leadership positions; and able to achieve their full potential.

She was a recipient of a NATO Postdoctoral Fellowship, an NIH Research Career Development Award, a Fogarty Senior International Fellowship, and a Lindback Award for Distinguished Teaching, as well as receiving numerous mentoring awards. The AWIS Governing Board honored the legacy of Dr. Leboy by unanimously passing a resolution to endow the Phoebe Starfield Leboy Public Policy Fellow from 2012-xxxx).