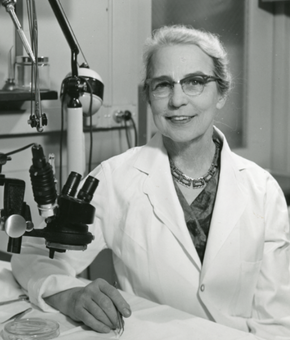 Evelyn Anderson was born of Swedish immigrant parents, the fifth of seven children, on March 20, 1899, in Willmar, Minnesota. She grew up there, graduating from Willmar High School, first in her class, in 1917. She attended Carleton College, graduating in 1921. During those years, she befriended and worked for the Dean of Women, Mary Lathrop Benton, who was soon to retire. With Mary Benton’s help, she attended medical school at the University of California. After graduating, she continued her studies along with clinical work. As her interest in endocrinological research developed, she went to McGill University in Montreal to pursue a PhD in biochemistry. There in 1933-34, she co-discovered and isolated the hormone ACTH, adrenocorticotropic hormone.

While at McGill, she met Webb Haymaker, MD, who was pursuing further work in neurology. In 1936 they married, going to California to continue their work. During the next four years, their three children were born. World War II broke out, and Webb was sent to Washington, D.C., serving in the US Army as a neuropathologist. Evelyn and the children remained in California where she divided her time between clinical work and research at the University of California.

In 1946 the family reunited, moving to Washington, D.C. Evelyn received a Guggenheim Fellowship which she took at Johns Hopkins University in Baltimore. In 1947, She took a post at the National Institutes of Health heading the section on Arthritis and Metabolic Diseases, which she held until the early 1960s. During those years she was active in professional societies. In 1962, she and Webb returned to California where they each continued work at Ames Research Center, Moffet Field. Throughout their professional years they collaborated where their fields intersected, writing on Cushing’s Disease and on the hypothalamus.

She also acted informally on her strong interest in racial justice. She worked with a group to integrate neighborhoods in Washington, D.C., supported Negro (the term at that time) colleges, lectured at Howard University, and spoke at the churches of her laboratory workers.

After her retirement in 1966, she and Webb remained in California, enjoying family life with children and grandchildren, in their hillside home. Evelyn died in 1986.

Recently, Carleton College connected its existing science facilities seamlessly with a new building, naming it in 2021, Evelyn M. Anderson Hall, in her honor.