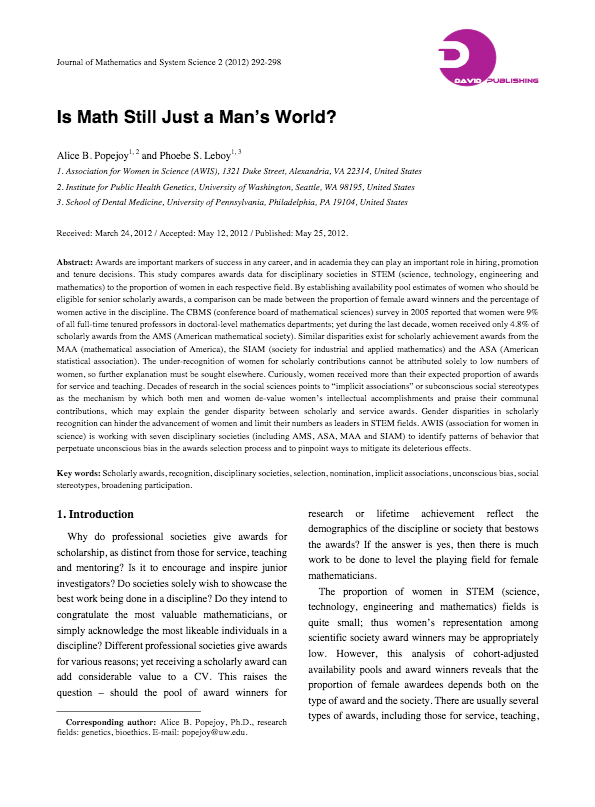 Abstract: Awards are important markers of success in any career, and in academia they can play an important role in hiring, promotion and tenure decisions. This study compares awards data for disciplinary societies in STEM (science, technology, engineering and mathematics) to the proportion of women in each respective field. By establishing availability pool estimates of women who should be eligible for senior scholarly awards, a comparison can be made between the proportion of female award winners and the percentage of women active in the discipline. The CBMS (conference board of mathematical sciences) survey in 2005 reported that women were 9% of all full-time tenured professors in doctoral-level mathematics departments; yet during the last decade, women received only 4.8% of scholarly awards from the AMS (American mathematical society). Similar disparities exist for scholarly achievement awards from the MAA (mathematical association of America), the SIAM (society for industrial and applied mathematics) and the ASA (American statistical association). The under-recognition of women for scholarly contributions cannot be attributed solely to low numbers of women, so further explanation must be sought elsewhere. Curiously, women received more than their expected proportion of awards for service and teaching. Decades of research in the social sciences points to “implicit associations” or subconscious social stereotypes as the mechanism by which both men and women de-value women’s intellectual accomplishments and praise their communal contributions, which may explain the gender disparity between scholarly and service awards. Gender disparities in scholarly recognition can hinder the advancement of women and limit their numbers as leaders in STEM fields. AWIS (association for women in science) is working with seven disciplinary societies (including AMS, ASA, MAA and SIAM) to identify patterns of behavior that perpetuate unconscious bias in the awards selection process and to pinpoint ways to mitigate its deleterious effects.