“It is vital that we continue to promote the need for a strong and independent US research enterprise.” 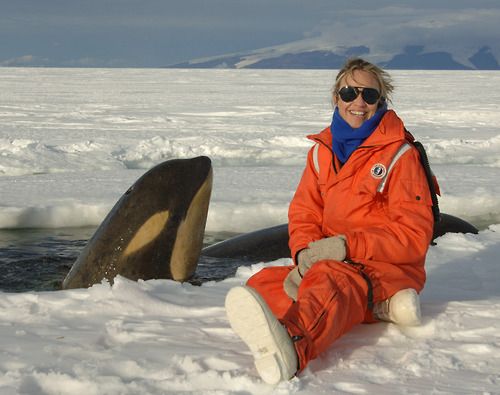 How long were in the Antarctic? What were you there for?

The year this photo was taken (2006), the concept of distinct ecotypes, variants of a particular species adapted to a specific locale or set of environmental condition, of killer whales in Antarctic waters was still relatively new. Our project was sponsored by NSF and National Geographic and focused on one of those ecotypes: “Type C” (now known as Ross Sea Killer Whale). We were collecting data to investigate basic biology and ecology of this form: skin and blubber biopsy samples for molecular genetics, stable isotope, and contaminant analyses; photographs of dorsal fins and saddle patches for individual identification to understand site fidelity, movement patterns, school composition and stability, and population size underwater vocalizations for comparison to other killer whale populations deployment of satellite tags to understand ranging and possible migration patterns.

Actually, my spouse was my colleague long before we became a married couple. We met on a research vessel in the eastern tropical Pacific when I was conducting my doctorate research. Our mutual passion for science was our first commonality and based on that, we became close colleagues, then friends, and finally, a family. We have been together for 27 years now and as I reflect back on that time, I can say without hesitation that the high points of my professional career have been our collaborations (including Masked Booby ecology on Clipperton Island in the tropical Pacific, Irrawaddy dolphin conservation in the Mekong, blue whale population identification in the Maldives, killer whale biology in Antarctica). My life has been enriched because we share not only common personal approaches to life, but also common professional goals, and for us, the two blend seamlessly together. Working with my spouse has never been a challenge because we have the tools we need to be more innovative, more productive, and have greater financial success together.

What are you working on now?

Though my passion always has been (and still is) field biology, I became Chief Scientist of major research project in the eastern tropical Pacific in 1999 and that has led to increasing roles in science direction and management, as a leader of the Ecosystem Studies Program in 2001, and now, as Director of the Marine Mammal & Turtle Research Division (since 2007). In this role, I am responsible for setting the research priorities for seven programs and some 70 individuals, and for day-to-day management of division resources. I am also an Adjunct Professor at the Scripps Institution of Oceanography and currently advise 6 doctorate students and teach two classes in marine mammal and seabird biology. And I still manage to carve out a little time for my own science. It is vital that we continue to promote the need for a strong and independent US research enterprise. My current work focuses on identifying and understanding the drivers of biodiversity hotspots in a large region in the oceanic eastern tropical Pacific.