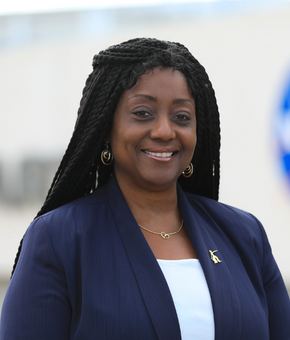 AWIS Webinar – Space is for everyone: Ensuring Diversity at NASA with Nichelle Nichols

The film Woman in Motion depicts the career of Nichelle Nichols and her efforts to recruit diverse astronaut applicants. Due to historical discrimination, space exploration was dominated by white men, until Nichols launched campaign to convince people to apply with slogans like “This is your NASA” and “Space is for everyone.” Gene Roddenberry used science fiction as a metaphor for the future in StarTrek, but Nichols helped make that vision a reality.

Barbara L. Brown serves as the director of Exploration Research and Technology Programs at NASA’s John F. Kennedy Space Center in Florida. She leads processing, assembly, integration, and testing of payloads and flight science experiments bound for the International Space Station. She serves as Kennedy’s lead for the formulation of concepts to support uncrewed operations on the Moon and Mars and directs research, development, testing, and demonstration of flight systems and technologies to advance exploration and space systems. The programs and projects under her purview span across NASA’s Human Exploration and Operations, Space Technology, and Science mission directorates, as well as the Mission Support Directorate.

Dr. Bhattacharya is the Program Scientist for Space Biology in the Biological and Physical Science Division at NASA Headquarters. Prior to joining NASA headquarters, Dr. Bhattacharya served a one-year term as the Space Policy Advisor to the US Senate Committee for Commerce, Science, and Transportation. Sharmila has been a Principal Investigator and senior scientist at NASA conducting scientific research on the space shuttle, the International Space Station, and small satellites journeying beyond low Earth orbit.

Dr. Amer is the Program Executive for the Earth Science Division in the Science Mission Directorate at NASA Headquarters. Dr. Amer leads and serves as the technical and programmatic expert of complex agency programs, supporting the Earth Science Division. Currently, she is working on three important NASA Missions: Geostationary Carbon Cycle Observatory (GeoCarb), Surface Water and Ocean Topography (SWOT), and Atmosphere Observing System (AOS). Prior to joining Science Mission Directorate, Dr. Amer worked in Technology Development Mission Directorate, Independent Program Assessment office that evaluates other NASA major programs, wind tunnels experiments; and Computational Fluid Dynamics Project (CFD). Dr. Amer is an inspiration to women and represents NASA as an ambassador of a Modern Figure. Dr. Amer lives her life by 3- Principles: “Please God and you will please all. Education is the key to opportunity. Serve others with compassion and kindness.”