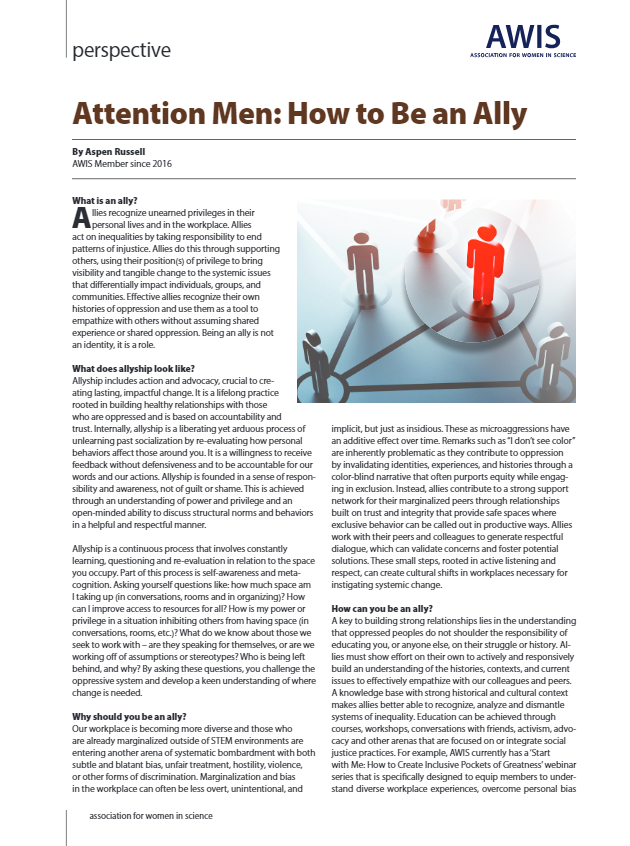 Attention men: How to become an ally for women’s rights

An ally recognizes unearned privileges in their personal lives and in the workplace and acts on inequalities by taking responsibility to end patterns of injustice. Supporting others means using privilege to bring visibility and tangible change to the systemic issues that differentially impact individuals, groups, and communities.

What is an ally?

Allies recognize unearned privileges in their personal lives and in the workplace. Allies act on inequalities by taking responsibility to end patterns of injustice. Allies do this through supporting others, using their position(s) of privilege to bring visibility and tangible change to the systemic issues that differentially impact individuals, groups, and communities. Effective allies recognize their own histories of oppression and use them as a tool to empathize with others without assuming shared experience or shared oppression. Being an ally is not an identity, it is a role.

Allyship includes action and advocacy, crucial to creating lasting, impactful change. It is a lifelong practice rooted in building healthy relationships with those who are oppressed and is based on accountability and trust. Internally, allyship is a liberating yet arduous process of unlearning past socialization by re-evaluating how personal behaviors affect those around you. It is a willingness to receive feedback without defensiveness and to be accountable for our words and our actions. Allyship is founded in a sense of responsibility and awareness, not of guilt or shame. This is achieved through an understanding of power and privilege and an open-minded ability to discuss structural norms and behaviors in a helpful and respectful manner.

Allyship is a continuous process that involves constantly learning, questioning and re-evaluation in relation to the space you occupy. Part of this process is self-awareness and metacognition. Asking yourself questions like: how much space am I taking up (in conversations, rooms and in organizing)? How can I improve access to resources for all? How is my power or privilege in a situation inhibiting others from having space (in conversations, rooms, etc.)? What do we know about those we seek to work with – are they speaking for themselves, or are we working off of assumptions or stereotypes? Who is being left behind, and why? By asking these questions, you challenge the oppressive system and develop a keen understanding of where change is needed. 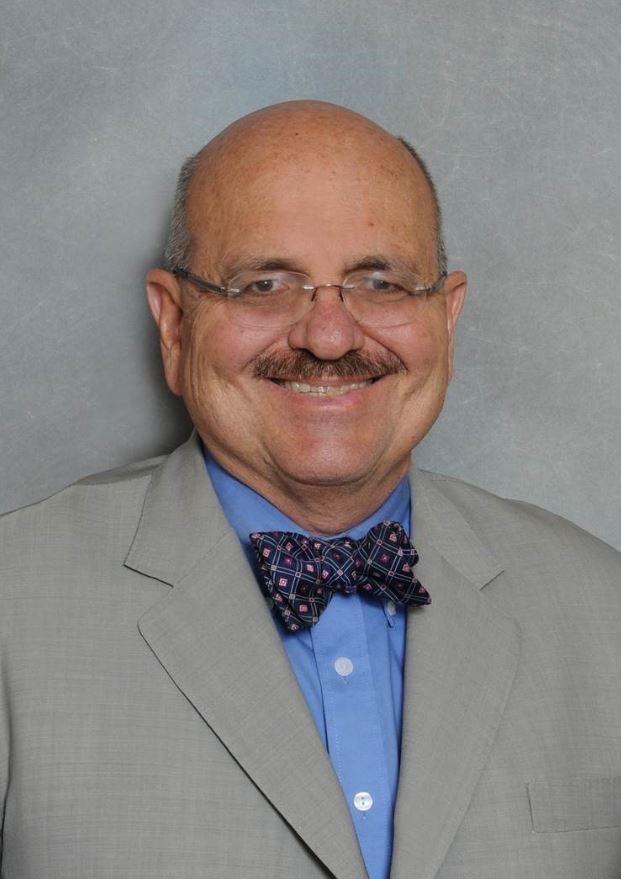 Professor of Chemical Engineering and Materials Science
and of Food Science and Technology, University of California Davis
AWIS National Governing Board Member 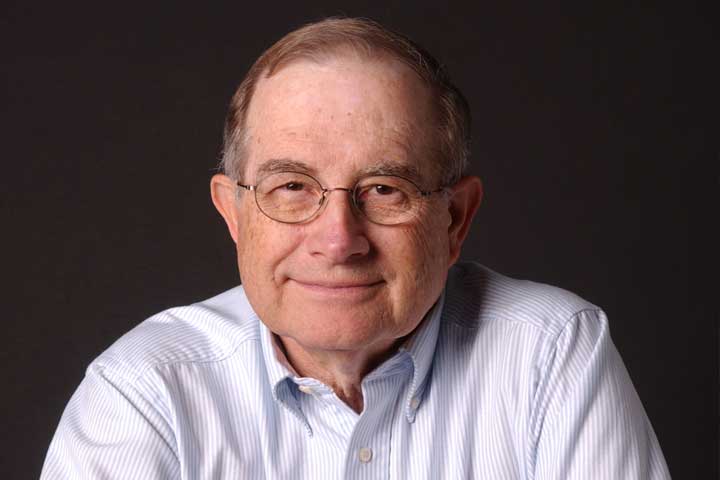 Why should you be an ally?

Our workplace is becoming more diverse and those who are already marginalized outside of STEM environments are entering another arena of systematic bombardment with both subtle and blatant bias, unfair treatment, hostility, violence, or other forms of discrimination. Marginalization and bias in the workplace can often be less overt, unintentional, and implicit, but just as insidious. These as microaggressions have an additive effect over time. Remarks such as “I don’t see color” are inherently problematic as they contribute to oppression by invalidating identities, experiences, and histories through a color-blind narrative that often purports equity while engaging in exclusion. Instead, allies contribute to a strong support network for their marginalized peers through relationships built on trust and integrity that provide safe spaces where exclusive behavior can be called out in productive ways. Allies work with their peers and colleagues to generate respectful dialogue, which can validate concerns and foster potential solutions. These small steps, rooted in active listening and respect, can create cultural shifts in workplaces necessary for instigating systemic change.

How can you be an ally?

A key to building strong relationships lies in the understanding that oppressed peoples do not shoulder the responsibility of educating you, or anyone else, on their struggle or history. Allies must show effort on their own to actively and responsively build an understanding of the histories, contexts, and current issues to effectively empathize with our colleagues and peers. A knowledge base with strong historical and cultural context makes allies better able to recognize, analyze and dismantle systems of inequality. Education can be achieved through courses, workshops, conversations with friends, activism, advocacy and other arenas that are focused on or integrate social justice practices. For example, AWIS currently has a ‘Start with Me: How to Create Inclusive Pockets of Greatness’ webinar series that is specifically designed to equip members to understand diverse workplace experiences, overcome personal bias and apply research-based knowledge to effect cultural change.

Seek out opportunities to hear about perspectives outside of your purview and focus on actively listening to peoples’ experiences. Engaging with knowledgeable systemic change and diversity groups at the local and national level, like AWIS, is an effective entry point to gain a basic understanding of the issues in your workplace and beyond. Be aware of your role in these spaces; they do not exist solely to solve your problems, and you shouldn’t expect to become the spokesperson. This is your opportunity to listen and learn about why these programs/groups/organizations exist and what solutions are being proposed. Once invited to participate in conversation focused on other’s struggles and inequalities, be cognizant of your speech patterns and habits. Be wary of “mansplaining,” or taking advantage of social and cultural norms that allow men to speak first, speak more, or take control of a conversation, regardless of their subject matter expertise or lack thereof. When you’re not talking about inequality in the workplace, be active in using language that helps create a welcoming and inclusive space. Keep conversations on topic; for example, there is no reason to bring up a woman’s attire no matter how seemingly positive or negative the comments may appear to be in your opinion (see: “benevolent sexism”). Inadvertent sexist comments contribute to exclusive environments as egregious harassment does. Being an ally doesn’t mean just thinking of yourself as not being sexist – it includes active intentionality in language and behavior to include others.

Engage with other men

Going against the established culture can be a difficult hurdle to overcome. However, those privileged in a given environment have the unique opportunity to make large changes with small actions. By intervening in conversations that seek to put down women, you begin establishing a new norm and create a handhold for other men to grasp onto. By establishing that it is okay to speak up in situations of bias, you begin to destigmatize allyship. It creates new conversational space for diversity advocacy and to share lessons learned from and about women’s experiences in the workplace. Though problematic, many men see women who voice their concerns as ‘acting out of their own self-interest.’ By expressing your validation of their concerns, you can encourage men to listen to women. As much as intervening and contributing to conversations can be immensely helpful to establish that sexism is not tolerated, having the ability to remove yourself from the conversation and open a space to listen and have others speak is even more vital.

Why is listening a key ingredient in allyship?

Listen more and speak less. As an ally, it is important to resist the urge to impose your ideas about how to “save” an individual or group. Believing and affirming those with whom we are in allyship is critical in validating the experiences a person has gone through. This is an opportunity for you to provide space, not take it up. Providing a sounding board or an opportunity for uninhibited conversation can be pivotal in creating the trust necessary to move forward with your relationship and have meaningful action further on. Support takes on various forms. This does not always lead to direct solutions or immediate action. While learning to support others, ask what the other person needs. That’s it. Often, the affected person or group already knows the course of action that is needed, but aren’t taken seriously, given space or time, or don’t have visibility. As an ally, you are able to counter these issues with your privilege and can be seen as not ‘acting out of self-interest.’ By listening, affirming and supporting those affected you are best able to achieve allyship. If recognized for your support or role in creating change, be wary of the spotlight you are now consuming; you should not be lauded for doing what should be expected of all allies. After all, you don’t have to deal with these issues every day. Call to action Systemic change is the outcome brought about by large groups of allies and affected people working together with the same and/ or compatible goals in mind. The path to this change is built on individual behavioral changes we make, relationships we build, and support we offer. We can all begin by taking inventory of our own biases, implicit and unconscious, and making a thoughtful effort to begin unlearning our socialized sexism. In many situations, we can make great progress by taking a step back and thinking of the intent and impact of our actions in relation to identity and influence. Know what is going on in your workplace and take responsibility for your role in it. Become an active ally to create meaningful, lasting change.