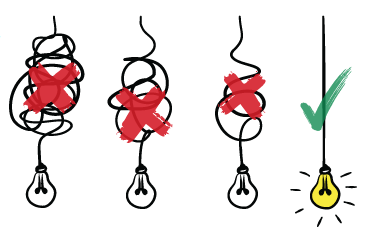 After finishing my PhD in a translational research laboratory, I thought I had a good idea of what it means to develop a drug. I’d received an NIH grant to identify and characterize a promising therapeutic compound and felt like my labmates and I were able to bring it closer to use in patients. When I graduated, I looked for opportunities to work on the business side of science, where venture capitalists collaborate with biotech companies to turn ideas into products. It took only a few weeks on the job to shatter every assumption I had made about what it takes to bring a drug to market.

I now routinely listen as scientists pitch new technologies. I’ve noticed that it’s common for researchers and investors to talk past each other, each side growing frustrated at the other’s communication style. Pitches by academic scientists can feel like repurposed department seminars, burdened by lengthy lead-ups to complicated data of indeterminate significance. But investors aren’t inclined to wait through a drawn-out backstory or figure series without clear answers to key business questions. Rather than waiting for your presentation’s punchline, investors want the “bottom line” at the top.

If you’re a scientist pitching investors on your technology, increase your odds of having a productive conversation by providing direct, thoughtful answers to four questions that will be at the top of any investor’s mind:

1) What is this idea worth if it works?

If you’re hoping to develop a drug, presenting a compelling business case is almost as important as presenting the results of your killer experiment. What’s the size of the available market? How devastating is the disease you’ve set out to treat, what does that say about whether patients will choose to stick with the therapy, and how likely will insurers be to pay for it? Who is your competition, how does your idea compare with others’, and how far along are comparable companies on the development path? Don’t make investors guess at the answers to these questions: lay them out clearly and with confidence.

2) How likely is this idea to succeed?

Investors will be more likely to take your idea seriously if you’re able to convince them that it’s likely to succeed. This assurance can help anchor them to aspects of your proposal that they already understand. For example, you may be engaging a target that’s already been well validated, relying on a known or safe modality, measuring your therapy’s impact on a widely agreed-upon biomarker, or addressing a condition known to have a high unmet need. Investors will feel more at ease if they already “get” some aspects of your proposal than they will if you hope to do something completely new with no clear indicators that it can be successful.

3) How much time and money will this idea require to generate value?

It’s important to convince investors that you will make meaningful progress toward increasing the value of your company before you plan to raise money again. They’ll also want to know how much time and how much money it will take to bring your drug to market and make it profitable. This can vary by disease and product profile. For example, a rapidly progressing orphan disease is likely to allow for faster, cheaper registrational trials, while a slowly progressing disease in a large, variable population may require large, expensive randomized trials with subjective endpoints. When speaking to investors, you may find that “difficult” indications can require a higher probability of success to make them attractive enough to investors to outweigh the appeal of working in a faster, cheaper, less-crowded disease space.

4) How readily will others perceive the appeal of this idea?

Investors make a living by recognizing patterns. When your company shares a phenotype with ideas that have been highly valued in the past, it’s easy for an investor to “get” how great your approach is. For example, if they know that a company with a drug targeting Protein X was acquired for $2 billion after Phase 2 data and you are pitching a drug against the same target with a wider therapeutic index, it’s not hard for an investor to imagine that another acquirer might also pay $2 billion after Phase 2 to own your drug.

Other times, comparables can make it nearly impossible to raise money. For example, it’s been a while since any antibiotic developer generated a substantial return for investors, so if you’re pitching an antibiotic program and need $250 million to get to market, then even an investor who believes in your drug but can only invest $50 million may hesitate to do so. They know they will lose money if other investors don’t reach a similar conclusion and provide the other $200 million.

But not all ideas require being “like” anything else. When doing something radically different, it helps to have a great management team with highly reputable advisers, who can raise enough money that any given investor is more afraid that you might succeed without them than that you might fail and lose them money. It’s not easy to recruit experienced advisers, so the ability to do so can be what makes your company appealing to investors.

Learning to think like an investor can take work, but anticipating and answering questions like these can help tailor any scientific presentation to the needs of a business audience. And if you’re interested in learning more about the business of biotechnology, I hope you’ll check out RA Capital’s free online courses, resources for innovators, and biotech-focused blog. We’re committed to sharing our best practices and to introducing new ways to address common challenges.

Jessica Sagers, PhD is Head of Engagement at RA Capital Management, a Boston-based biotech investment firm. She holds a PhD from the Division of Medical Sciences at Harvard University.