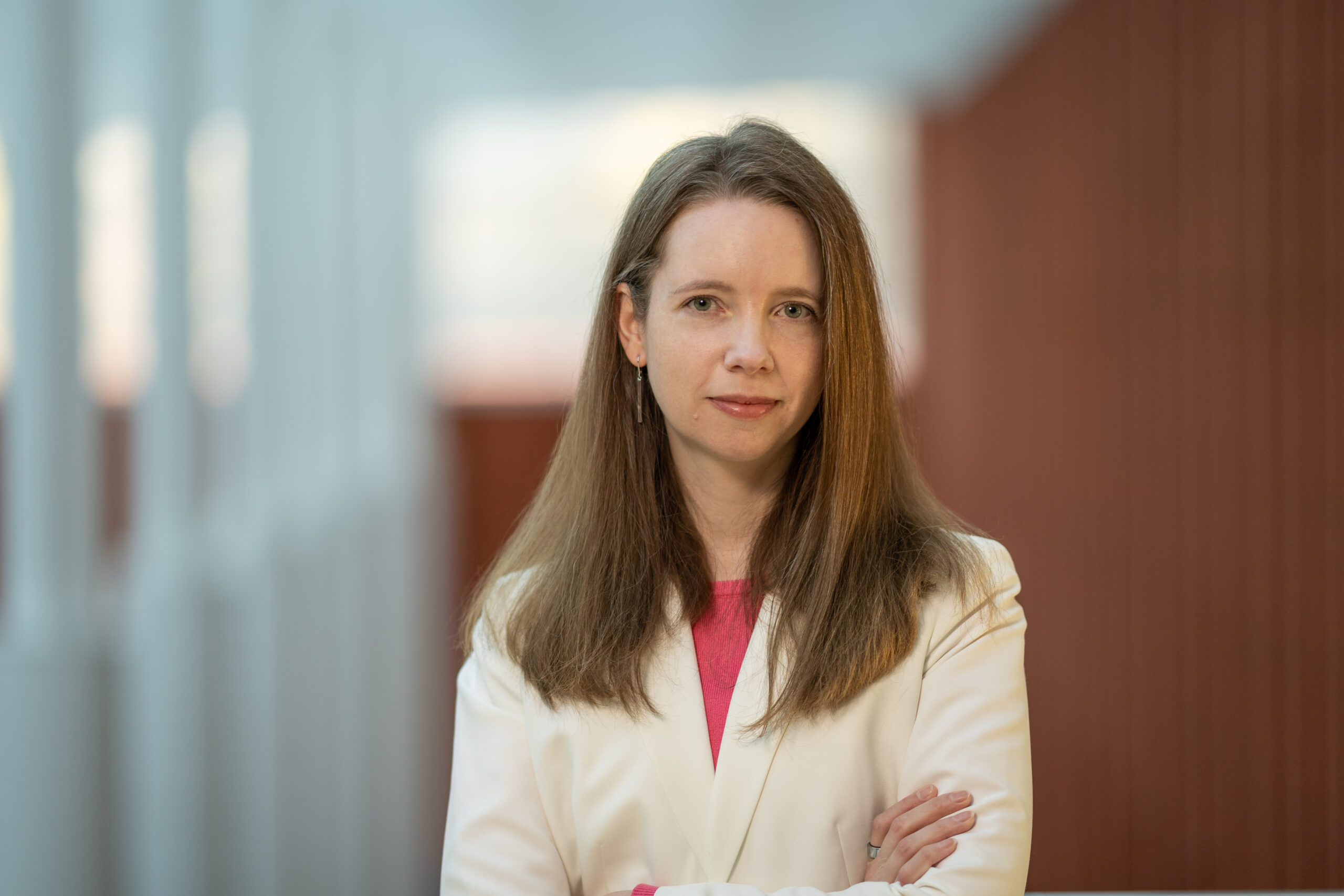 The profession of medical physics is an intricate fusion of science, technology, engineering, math, and medicine. And, like the majority of STEMM fields, men dominate its ranks, especially in the upper echelons. The representation of women medical physicists in the United States stands at about 23–24 percent and inches upward just a few tenths of a percent per year. Although the representation of women graduate students and residents has been much higher than this figure for years, we have not seen this translate into more women permanently engaged in medical physics careers. And research funding, awards, and recognition are still overwhelmingly distributed to men.

The barriers to women who want to pursue and advance in the sciences are both visible and not so visible. Some of these are the destructive narratives that circulate about women in science: There’s Italian physicist Alessandro Strumia’s infamous “physics was built by men” remark; theoretical physicist Lawrence Krauss’s contention that a “tyranny” of diversity is harming academia; and former Google engineer James Damore’s manifesto positing “biological differences” that allegedly make women less suited to tech jobs.

But perhaps the most vicious barrier of all is the pervasive nature of sexual harassment, which includes not only overt sexual acts, such as coercion and unwanted sexual attention, but also gender-based harassment. In 2018 the National Academy of Sciences, Engineering, and Medicine (NASEM) published Sexual Harassment of Women: Climate, Culture, and Consequences in Academic Sciences, Engineering, and Medicine, which put a laser focus on this problem. One of the conclusions of this report was that “the cumulative effect of sexual harassment is a significant and costly loss of talent in academic science, engineering, and medicine, which has consequences for advancing the nation’s economic and social well-being and its overall public health.” NASEM’s report summarized five factors that increase the likelihood of sexual harassment: a perceived tolerance for this behavior; environments dominated by men; hierarchical power structures; symbolic compliance with legal requirements; and uninformed leadership. All of these factors exist in medical physics, but we are still lacking a clear picture of the climate related to gender-based discrimination and sexual harassment in our field.

Making Our Own Assessment

To examine our current culture scientifically, colleagues and I at the University of Michigan initiated a qualitative-interview study of medical physicists and medical physics residents working across the United States. For this project, I was fortunate to partner with Dr. Reshma Jagsi, who is Newman Family Professor of Radiation Oncology, Deputy Chair of the Department of Radiation Oncology at Michigan Medicine, and Director of the Center for Bioethics and Social Sciences in Medicine (CBSSM); and Kerry Ryan, MS, who is a senior research associate at CBSSM.

We conducted thirty-two one-hour, semi-structured interviews, evenly split between men and women participants, in the first half of 2019. We asked participants if they felt included at their institution and within the field in general, and whether they believed that gender impacted their ability to succeed and the way colleagues treated them. We also asked participants if they had ever personally experienced harassment during their career that was related to gender or to any other personal attribute.

We developed a qualitative coding scheme for the interview transcripts using inductive thematic analysis for interpretive description, which means that as we analyzed our data, we did not try to fit it into an existing narrative but instead explored any potential themes that might be present.

One of the most disconcerting results of this study was how polarized the views were about whether discrimination even exists, or has an impact, and if there is an impact, whether it benefits men or women. For example, one participant shared: “I generally find it to be a pretty unbiased field in terms of gender. I’ve definitely heard from some of the women in my department saying, ‘I didn’t really like it when I was over at that clinic. It felt like a bunch of good old boys, and there was this sort of impenetrable wall that a woman was never going to get through, where the men interacted with the men in a way different [from the way] they did with the women.’ … While it may have affected the environment, I don’t know if it affected the woman’s ability to do work.”

The reason we find this view concerning is that it directly contradicts evidence from decades of research in organizational psychology, evidence illustrating just how profound the impact of gender-based discrimination can be. If we deny the impact of this discrimination, we will never be able to address it.

There were many compelling stories shared by our participants that revealed a wide range of challenges, from implicit bias and casual sexist comments to overt harassment and bullying. Participants shared personal experiences related to unequal compensation, discrimination against mothers, discrimination during the hiring process, gender-biased assumptions about behaviors or goals, communication biases, and overt and persistent sexual harassment. We all have our own stories—you can read one of mine in the inset of this article.

One late afternoon at work I had barricaded myself in my office while trying to study for my final board exam. My mind was overwhelmed with radioisotope half-lives, dose calculation algorithms, and how many loads of laundry I needed to get done that weekend. A colleague pushed open my mostly closed door and walked up behind me, holding a USB stick. He wanted to know if I’d care to have any of his old exam study materials. Not thinking about it too much, I took the device and put it into my computer. After a few moments, the external drive folder popped up. I saw a series of PDF copies of medical physics reference books that I recognized. I also saw an enormous number of books with explicit sexual titles. Some of the document titles were in a different language that I couldn’t read, and some were in English. Bending over me, the colleague asked whether I could read them or not. I said I couldn’t. He laughed and said that that was a good thing, he wouldn’t want me to be able to. All I remember at that moment was feeling cold, and sort of blank—I had no idea where this was going. The first response I thought of was to ask if I could keep the drive and give it back later, which in retrospect feels weird. But I thought it would make him leave the office, and he did. I never reported this, and a few months afterward, I left that institution for another. Sometime later I asked a trusted friend if she thought he had done that on purpose, and I still feel naive for not being sure one way or the other. I am also angry that this is still taking up space in my brain so many years later.

The following is an excerpt from an interview with a woman resident:

“There’s always at least one creepy guy at your institution who’s always hanging around you a little closer than you would like them to be, or always trying to make weird eye contact with you, and you’re always trying to avoid that, or they put their arm around you or call you ‘honey,’ or ‘sweetie,’ or something, and I’ve had that at every place I’ve ever been ever, and so has every one of my girlfriends, but it’s nothing beyond that.”

Notice the words that are used here to illustrate the ubiquity of these circumstances: four instances of the word always, as well as phrases including “every place I’ve ever been ever” and “every one of my girlfriends.” But ultimately, she gives an example of how women have been conditioned to accept this behavior, when she says, “but it’s nothing beyond that.”

We expect to publish results from the portion of our qualitative interview study related to gender-based discrimination and sexual harassment in medical physics later in 2022. We hope that the published report of these data will help the medical physics community come together on this issue, so that we can support all of our colleagues in succeeding in this career, whatever way they choose.

Related to this goal, one of the NASEM report’s recommendations is for the entire academic and clinical community to take responsibility for preventing gender-based discrimination and sexual harassment. Correcting the injustices present in the academic medical community, of which sexual harassment is only one component, will not be easy, but I believe we are up to the task. I believe that we all have a common purpose to provide the best care possible to our patients, and that means emphasizing an inclusive and safe culture for all.

Dr. Kelly Paradis is an Associate Professor of Medical Physics and the Associate Chair of Equity and Wellness within the Department of Radiation Oncology at Michigan Medicine. She received her PhD from the University of Michigan in 2010 with her thesis, “Rydberg Atoms for Quantum Information.” She has been a faculty medical physicist at Michigan Medicine since 2014. She has been an AWIS member since 2021.