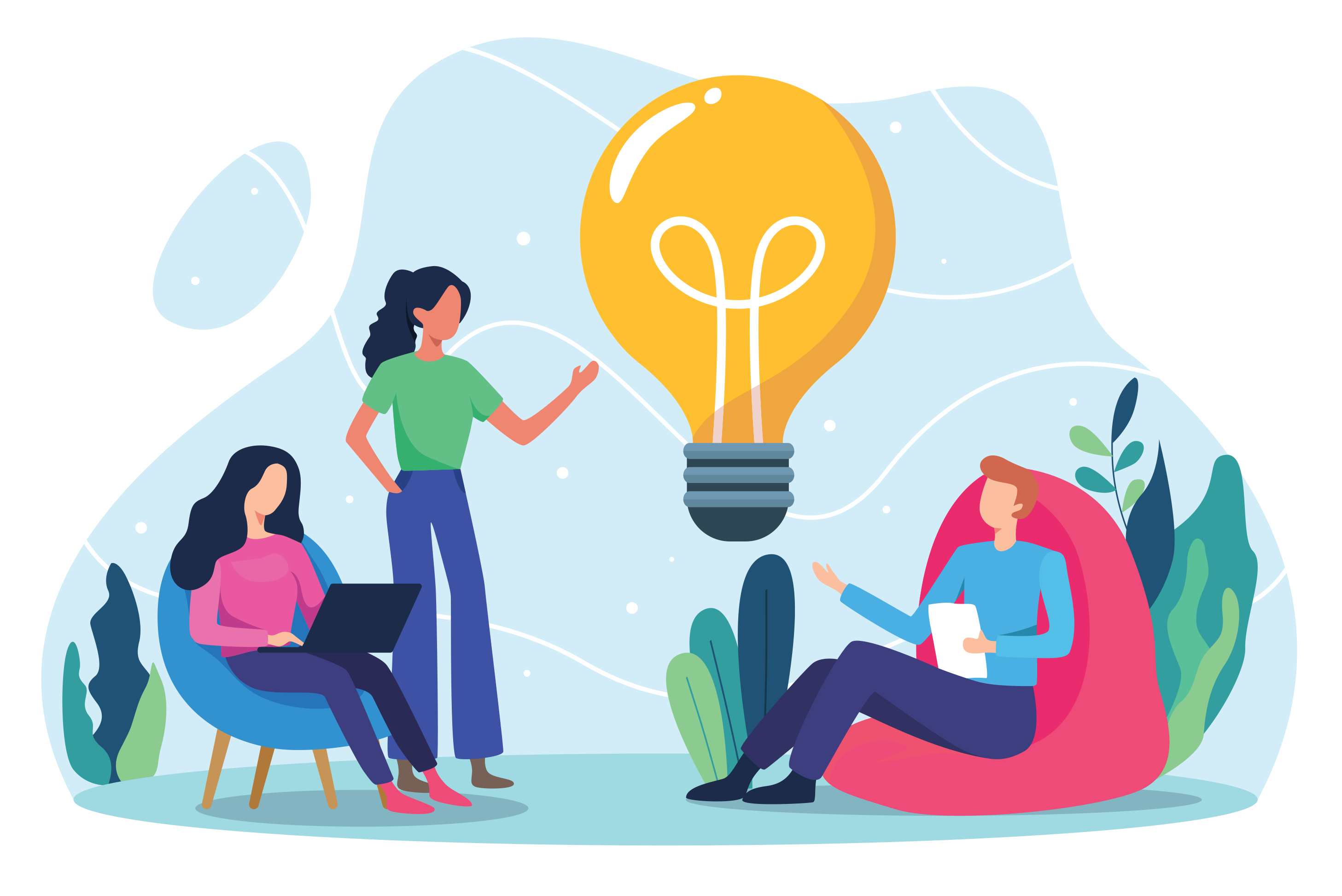 More women are becoming patented inventors than ever before. Of the new inventor-patentees in the U.S. in 2019, 17.3% were women, compared to 16.6% in 2016. This means that more women are inventing and participating in the patent system each year. 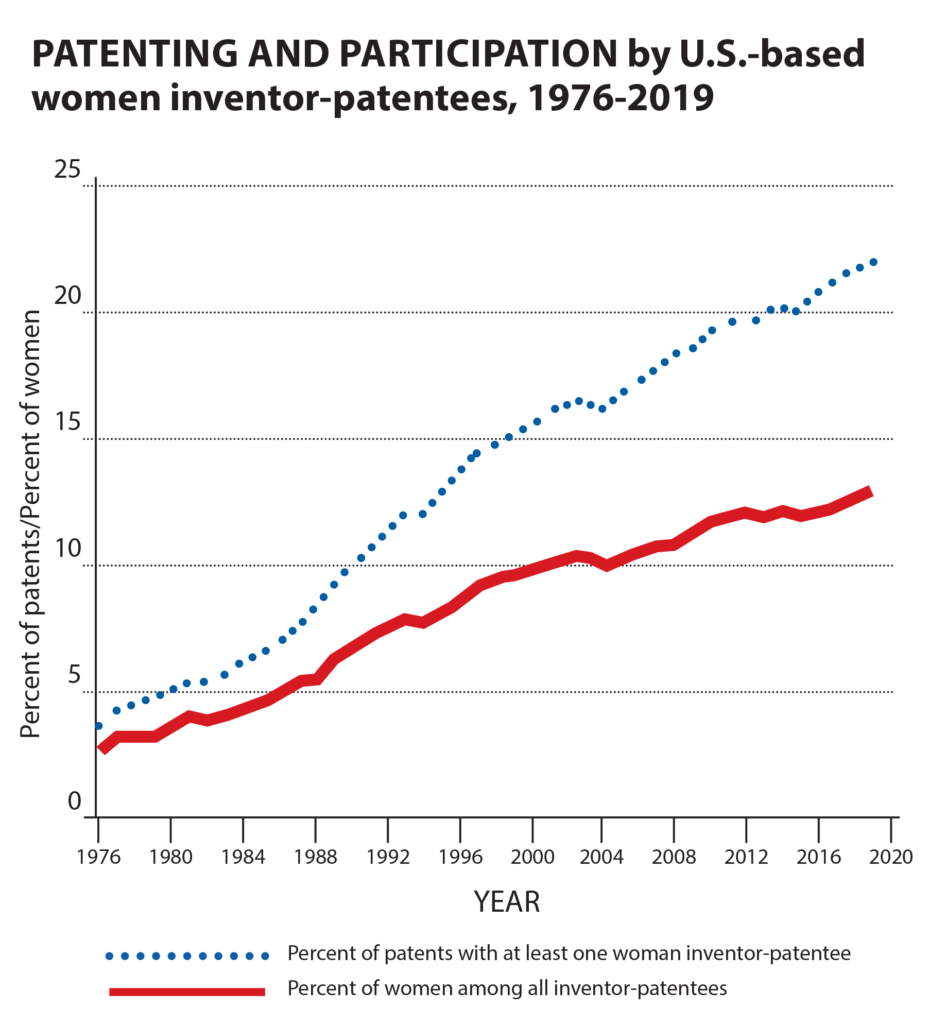 Source: Based on Progress and Potential 2020 update on U.S. women inventor-patentees analysis of PatentsView data, 1976–2019 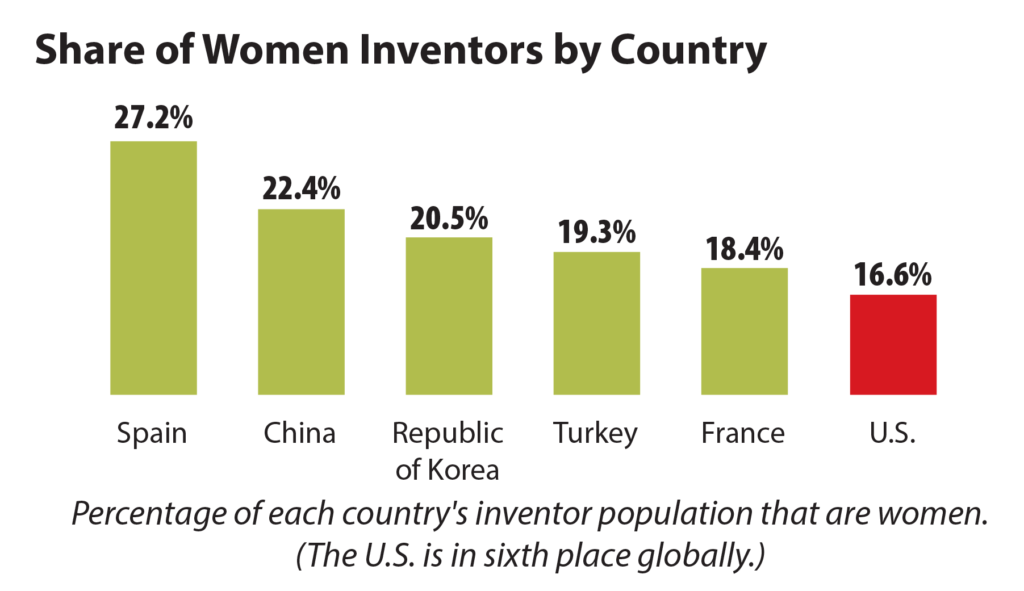 But these percentages are still small. By 2019, only 12.8% of all inventor-patentees in the U.S. were women. And in 2021, the U.S. dropped to sixth place globally in terms of our share of women inventors (Spain, China, Korea, Turkey, and France are in the lead, respectively).

The so-called patent gap — which includes gender, race, and income — extends in part from the barriers that exclude white women and people of color from STEM fields in the first place: stereotypes, discrimination, bias, and harassment; additional caregiving responsibilities and the “motherhood penalty;” lack of access to mentorship and social networks; being held to a higher standard than counterparts who are white men; and the list goes on.

Further, because there is no formal education on innovation and patenting for anyone, it matters who has access to information on the patent process. Inventors often rely on mentors, informal support networks, and expensive patent attorneys to guide them through the process, and they may need advisers, supervisors, and other gatekeepers to invite them into innovation spaces. Not surprisingly, these key resources are less accessible to white women and people of color than to white men.

The opportunity to become a patented inventor — which leads to credibility, higher income, and more opportunities — should not be decided by one’s gender, race, or income. Plus, we need everyone’s ideas and participation to meet today’s challenges. Patent diversity strengthens innovation, which results in more solutions that benefit more people.

One of the coalitions working to improve patent diversity is Invent Together, of which AWIS is a founding member. Learn more at InventTogether.org and by following @invent_together and #PatentDiversity on Twitter. You can find the latest recommended actions in Tackling the Gender and Racial Patenting Gap, a July 2021 report by the Institute for Women’s Policy Research, another Invent Together partner.