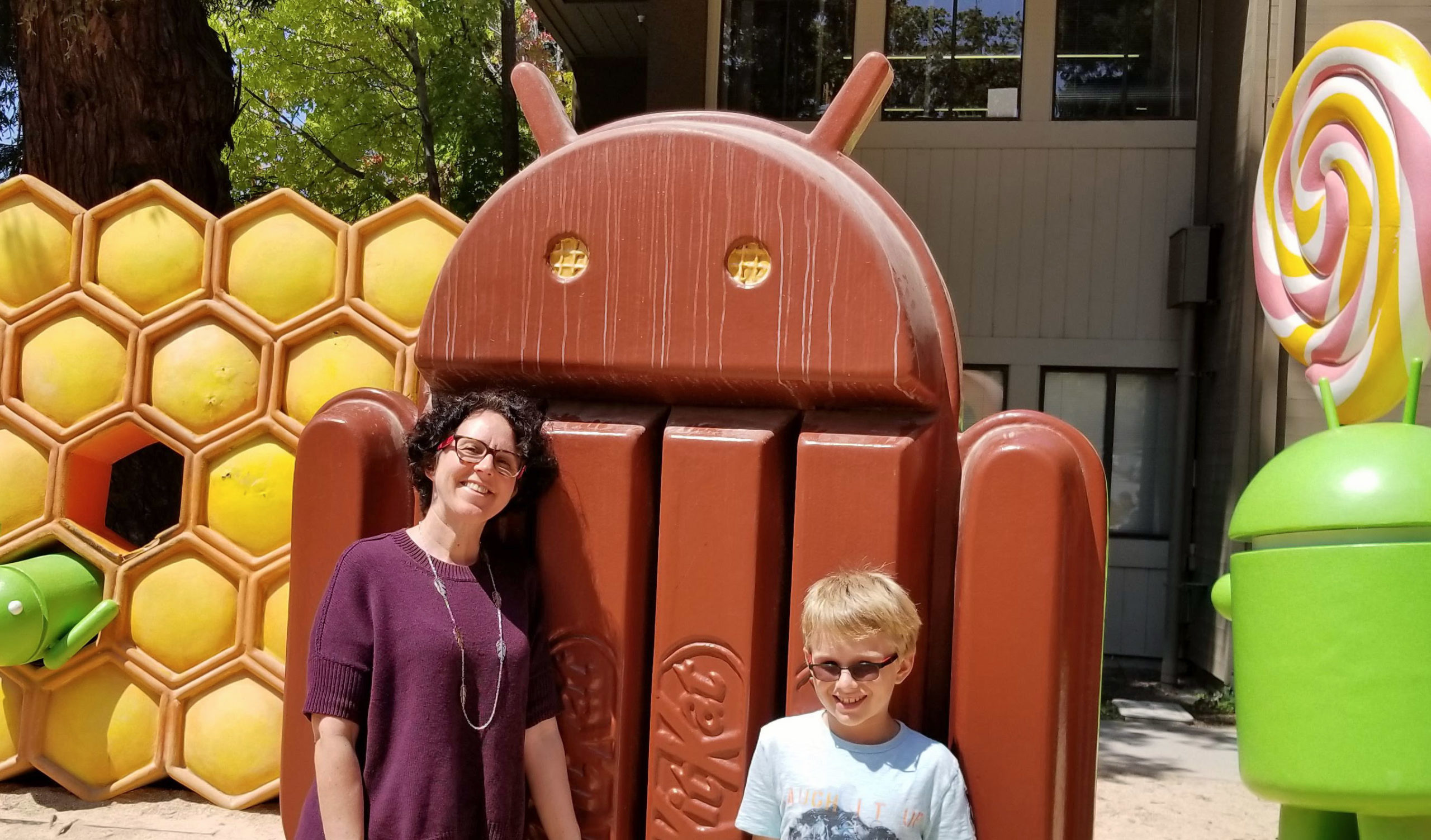 My Year of Saying, Yes!

In 2014, standing in my sister Cindy’s kitchen, I blurted out my fear: “My career is over. I’m too old. I haven’t worked full-time in seven years. No one will ever hire me again.” I was forty-one years old.

Cindy looked at me incredulously, but I really felt that way. I was adrift. I had lost confidence in myself, and I believed the most interesting part of my work life was over.

I had only returned to the working world a few years before, after taking some time off to stay home with my son, Jack. It had taken me nearly three years to get pregnant, and toward the end, I had quit my job to focus on fertility treatments.

After he was born I decided to spend a year as a stay-at-home mom, which would have surprised the heck out of younger me — I’ve never been a baby person. I warned my husband that I might go stir crazy and go back to work before the year was up, but in the end I did it, staying home for that first year. And then for another year. And another.

At the end of three years I was getting restless, but I wasn’t sure what I wanted to do next. I didn’t want to work on designing IVRs — automated phone systems, through which you talk to a computer rather than to a human — anymore. But I didn’t know what else to do. In 2011 a former colleague called me up and asked me to join his start-up. I said, “Does it involve speech recognition?” He answered, “Yes,” and I said, “No thank you!” But he persuaded me to come see his demo, and I was instantly hooked.

I spent the next couple of years working part-time on some cool interactive technology, but alas, after two and a half years the company, like so many start-ups, folded. At this point, with some encouragement from a friend, I decided to see a career counselor, and slowly, over time, it became my year of saying, “Yes.” Shonda Rhimes, in her 2015 book, Year of Yes, wrote, “You just have to keep moving forward. You just have to keep doing something, seizing the next opportunity, staying open to trying something new. It doesn’t have to fit your vision of the perfect job or the perfect life. Perfect is boring, and dreams are not real. Just … DO.”

I had no idea what I wanted to do in this next phase of my life, but the career counselor suggested focusing on something I was really interested in, regardless of its career possibilities. In the end I chose to spend time thinking about relationships: I’ve always been fascinated by how people choose their romantic partner. I started a blog called Love Data and wrote about subjects like sweaty T-shirt parties (a new way to speed date), and I interviewed experts on relationships and communication. I hate cold-calling people, and I had to practice over and over what I would say before I called up a Stanford professor of education to see if he’d agree to be interviewed. I found that most people were kind, and many were extremely generous with their time.

I still had no idea how to turn this into an actual job, but unexpected opportunities started to pop up. For example, I was invited to a conference in Berlin to present work I’d done analyzing tweets about online dating. When the organizer initially reached out, asking me to come, I told her: “I can’t … it’s a data science conference, and I’m not a data scientist!” Nonetheless, she gently but firmly encouraged me, saying, “Of course you can.” So I set aside my hesitation and went. Did I get lost wandering along the freezing streets of Berlin in February, because of my legendary inability to read maps? Yes I did. But I had a great time exploring the city, and speaking at the conference.

I said yes to consulting for more startups, including one that made a smart grill, even though I didn’t like to cook. I said yes to volunteering for Girls Who Code (whose mission is to close the technology gender gap), even though I found the idea of standing up in front of a bunch of teenage girls terrifying. I was sure they’d see right through me and know what a geek I was in high school, unaware that I was “supposed” to wear my backpack on one shoulder instead of two. Despite my nervousness, I did it anyway, and some of these young coders went on to study computer science in college. 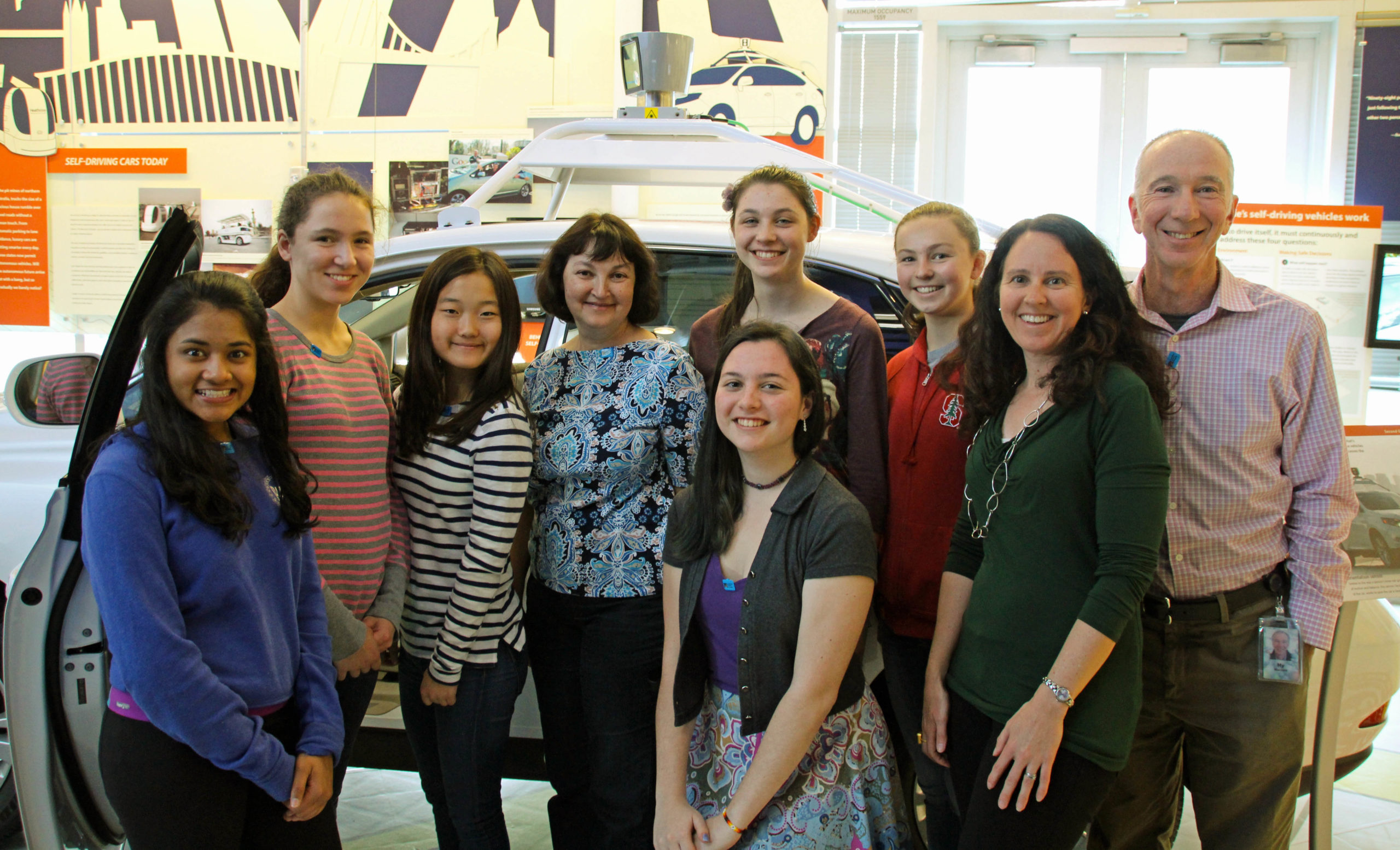 Checking out the Google self-driving car with my Girls Who Code club.

I said yes to a taiko drumming class, something I’d always wanted to do. I was the only beginner in the class, and I definitely struggled to keep up. After the class ended, the instructor approached me, and I thought, “Now he’s going to tell me what a good job I did!” Instead, he said, “Now is the time when you help us clean up.”

I also said yes to writing a book. O’Reilly Media was looking for someone to write about voice user interfaces, and after a friend made an introduction, they invited me to submit a proposal. I didn’t think I would really be able to write a book; I was working at another start-up, and my son was still young, but a kind editor convinced me to take the leap.

I wrote in the evenings after my son went to bed, and I spent ten months on a roller coaster of elation and despair. I had days when I was so excited — I’m writing a BOOK! — and days of gloom, when I thought, “What am I doing??” But I got through it, and I’m so glad. It’s opened a lot of opportunities for me. 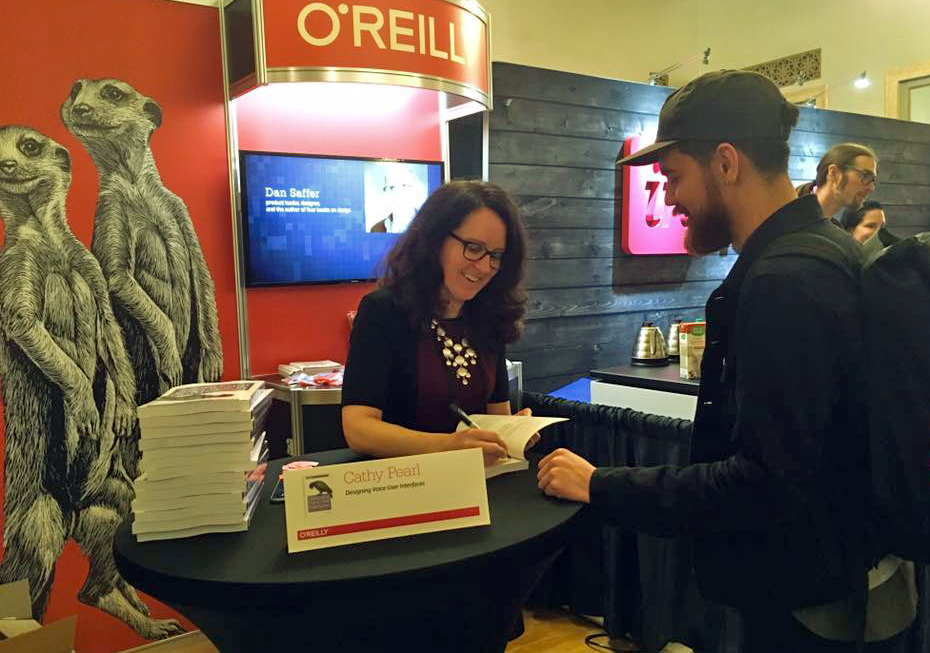 And I signed up with a recruitment agency, sent out resumes, and interviewed and was rejected for various jobs. One interviewer scolded me for having a 3D pie chart in one of my presentations.

Eventually I found my way into a part-time job at a healthcare start-up, and after three years I became the Vice President of User Experience.

In 2018 I made the move to Google, working on the Google voice assistant as Head of Conversation Design Outreach. The job matched with so many of the things I’d told the career counselor I wanted: work I felt was meaningful, collaborating with interesting people, and sharing my knowledge.

Since then I’ve been on an amazing ride. I went on a retreat to discuss artificial intelligence in Norway and stayed at the beautiful hotel where the movie Ex Machina was filmed. I spoke at a workshop at the MIT Media Lab on the best ways to help astronauts survive a trip to Mars. I became a Webby Awards judge, wrote an article on voice and inclusion for the Harvard Business Review, and in 2020 was listed as the #1 product and design pro in voice by Voicebot.AI. I was quoted in the Wall Street Journal, the epitome of “making it” in my grandmother’s eyes (she was 105 at the time!). I also joined the board for the nonprofit Women in Voice, which amplifies the work and talent of women in voice technology. 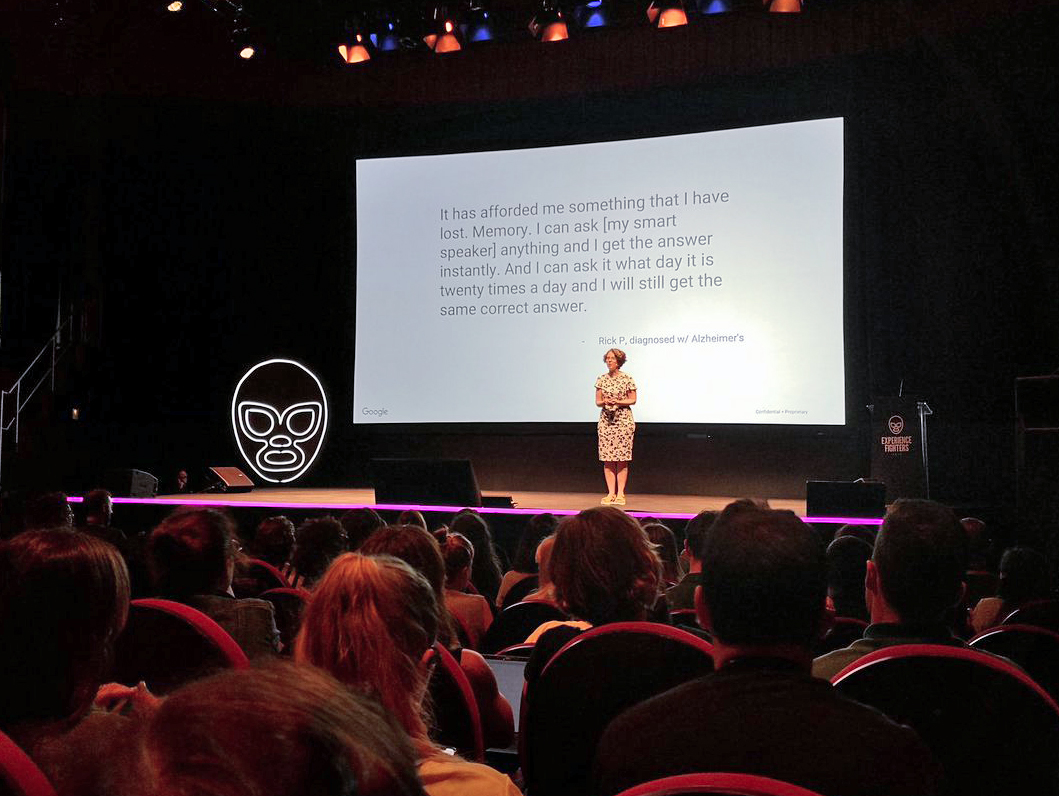 On stage in Madrid.

Through all of it, I’ve tried to channel that power of saying yes. So many times, my first reaction to new opportunities has been doubt or fear. Should I really do that? Am I actually qualified? Wouldn’t someone else do a better job? But the more I do, the more I know myself and my abilities, and what things aren’t a good fit for me. It’s not just about following one dream or finding the perfect fit. It’s about staying open and finding the surprise and joy in whatever you do.

A year after I joined Google, I found myself in Madrid, Spain, getting ready to give a talk about the democratization of voice user interfaces, in front of an international audience of one thousand people. I had landed a day and a half earlier — without any luggage (for unknown reasons, my suitcase had decided to go to Frankfurt instead). After frantically shopping for a dress and shoes at a local mall, I paced nervously back and forth behind the stage. Despite having given many talks, I still felt jitters beforehand.

I stepped on stage and said my first words: “Hola! I’m very happy to be here,” and I made a joke about tigers (the conference was inside a former circus building). I looked around at the quiet, listening faces, and my nervousness melted away. I was five years older than when I’d had my crisis in Cindy’s kitchen, and I marveled about how wrong I had been. My career wasn’t over. It was just beginning its second act.

As a Design Manager at Google, Cathy Pearl leads a team of conversation designers for the Google Assistant. She is also the author of Designing Voice User Interfaces: Principles of Conversational Experiences, published by O’Reilly Media in 2017. She’s been building innovative voice technology for over twenty years, has an MS in computer science from Indiana University, and has a BS in cognitive science from University of California San Diego. She has been an AWIS member since 2001.